In the VEX Robotics Competition, presented by the Robotics Education & Competition Foundation, teams of students are tasked with designing and building a robot to play against other teams from around the world in a game-based engineering challenge. Classroom STEM concepts are put to the test on the playing field as students learn lifelong skills in teamwork, leadership, communications, and more. Tournaments are held year-round at the regional, state, and national levels; local champions go on to compete against the best in the world at the VEX Robotics World Championship each April!

VEX Robotics Competition Tower Takeover is played on a 12’x12’ square field configured as seen above. Two (2) Alliances – one (1) “red” and one (1) “blue” – composed of two (2) Teams each, compete in matches consisting of a fifteen (15) second Autonomous Period, followed by a one minute and forty-five second (1:45) Driver Controlled Period.

The object of the game is to attain a higher score than the opposing Alliance by placing Cubes in Towers, or scoring Cubes in Goals.


Watch the video to learn more!

At the start of each season, we set aside about a month for analyzing the game manual, reading forum discussions, brainstorming, strategy, and scoring point analysis. We also research other videos of robots to see what works well, and what doesn't. We then list the pros and cons of each mechanism that could potentially go on the robot. This is done through hours of meticulous research online. At the end of this period, we decide on a strategy and general idea of what mechanisms we want for our robot.

We then move on to the prototyping stage. With our chosen strategy in mind, we prototype our ideas, test them, and improve on them. Team members usually work solo or in groups of two to develop their ideas. We then share them and build on each others designs to see what is effective. At this time, we will sometimes build a mini test robot to test some of our designs. Once we find something we like that works well, we move to the next stage. This is a fundamental stage for the design process as this will help us design the entire robot.

Now, we enter the beta build stage. With the prototypes we like most, we build a basic robot following the designs we previously decided on. This starts with making more detailed sketches and improved prototypes. With this, we make a beta build of the robot in about a month. This robot is not meant to be perfect, but it will alow us to take it to an early season tournament to scope out it’s competitive abilities. We then examine the robot’s performance at both an early season tournaments and in timed runs in the lab. This helps us see what needs improvements in the next build.

The next step is the competition build! With what we learned from the beta build, we edit our robot so it will become a V2. This helps us fix anything undesirable, unsound, or problematic from the original beta design. What we end up with is our first real competition-ready robot. From here, we continue to make improvements based on any small problems we encounter. This is usually small tweaks, and at this point, we usually have an idea of what works, what doesn't, and what we want to have on our robot. 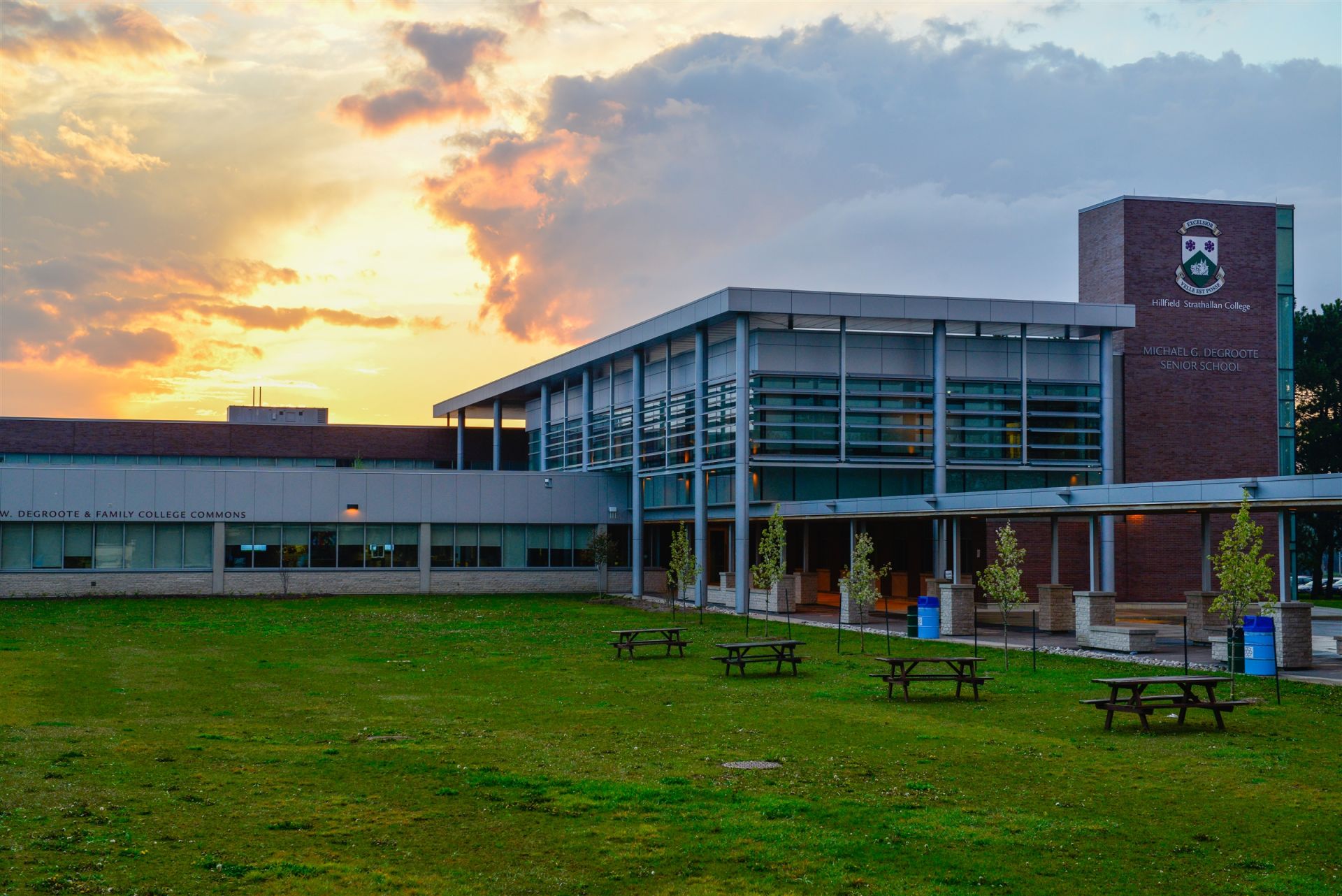 Founded in 1901, Highfield School for Boys was the first private residential and day school for boys in the city of Hamilton. It was a prep school for boys that were planning to enter the Royal Military College of Canada. Many graduates played key roles in the Canadian military. A series of name changes, reconstructions, new construction, and amalgamations with other schools have since occurred, resulting in a single modern co-educational facility. Strathallan College was a school for girls nearby. Eventually, the two schools merged and began a co-education program known as Hillfield Strathallan College. Currently, Hillfield Strathallan College is a private, co-educational school in Hamilton, Ontario, Canada. The academic program runs from Montessori Toddler and Pre-Kindergarten to Grade 12, with a STEM programs starting in Grade 3/M8.